During the last period of the project, the 3 tubular horizontal semi-closed photobioreactors (PBRs) have been operated in series in order to promote the growth of cyanobacteria and the accumulation of polyhydroxyalkanoates (PHA). The selection of cyanobacteria over green microalgae was promoted in the first PBR, which was fed with agricultural wastewater, collected from an agricultural runoff channel. A feast and famine strategy, regarding the addition of inorganic carbon, was applied in the second PBR in order to complete the selection of those cyanobacteria able to accumulate carbon as PHA. Finally, the accumulation of PHA was expected to be increased in the third PBR adding inorganic carbon in no limiting conditions. The feast and famine strategy and the addition of the external carbon source were optimized during this last period.

The results showed than an excellent removal of nutrients (nitrogen and phosphorus) from the agricultural wastewater, which was achieved mostly in the first photobioreactor (PBR). A constant development and dominance of blue-green coloured populations of cyanobacteria was obtained in the first PBR, while the biomass turned to green‑yellow in the second and third ones, as expected due to nutrients limitation and the loss of pigments (Figure below).

Pictures of cyanobacterial biomass in the different culture stages (PBR1, PBR2 and PBR3)

Regarding the accumulation of PHA, after the optimization of the feast and famine strategy and the addition of the external carbon source, a clear increase was observed up to a maximum of 4.5% of PHA (percentage of the total biomass). This value is still low, but close to previous results obtained at the lab. On the other hand, the accumulation of carbohydrates was stabilized between 30% and 60% in the third PBR, representing a major carbon storage form, one order of magnitude over PHA accumulation. According to these results, we can conclude that cyanobacteria were able to accumulate PHA through this photosynthetic process in PBRs, using agricultural wastewater as a source of nutrients. In addition, it is possible to accumulate both PHA and carbohydrates at the same time. However, the PHA concentration is still low and further research is being performed aimed at optimizing the process and increasing the accumulation of PHA.

During this last period, the wastewater postreatment by solar-driven filtration-disinfection system has been feed with raw agricultural runoff in order to test its performance under more stringent conditions. This new water source had a significant higher turbidity in average. When the water from the settler had a turbidity which was normally below 5 NTU, the water from the agricultural channel had an average turbidity around 30-50 NTU, on rainy days the turbidity level was even higher than 100 NTU. Both disinfection systems were running with water from the agricultural channel at an average flow of 100 – 300 l/h each. The daily water production was between 5m³/day and 10m³/day, depending on the overall function of the system. Overall the pilot tests in Barcelona have shown, that the most effective strategy to operate the UF-system nearly stable without chemicals, was the backflush into evacuated capillaries. Other performed tests have also shown a positive effect, but not as much as the backflush into evacuated capillaries. After gaining these results, it was also tested, what happens if the backflush into evacuated capillaries is not performed on every backflush, but for example every 5th or every 10th. It could be observed, that after every backflush into evacuated capillaries (singe airBW) the transmembrane pressure went down significantly. Even when the membrane was completely blocked (TMP between 1,5 - 2,0 bar) it was possible to recover some membrane performance by applying successively several backwashes into evacuated capillaries (multi airBW). This was a great result, even if of course this procedure did not clean the membrane completely (like a CIP cleaning with chemicals) as after the multi airBW, the transmembrane pressure decreased a lot, but after it also increased pretty fast again. 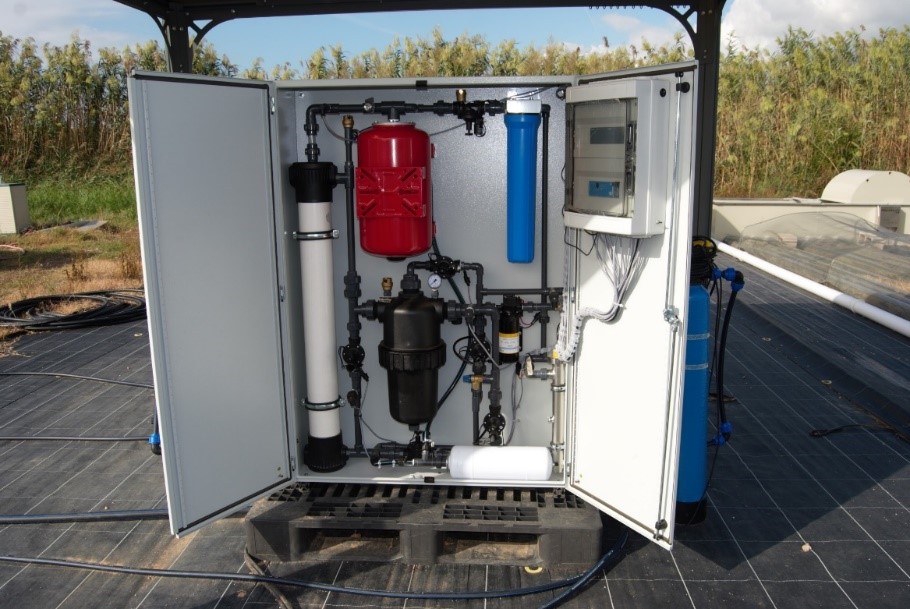 In a downstream section of the process line, the nutrients recovery columns have been fed alternately with the effluent of the lamella settling tank and the effluent of the filtration-disinfection system, with an additional dose of nutrients, in order to test the performance of the system with a significant influent concentration of nutrients. The measured influent levels of phosphorus were between 5 – 10 mg/L, depending on the phosphorous loading of the influent stream, while the effluent phosphorus levels were consistently under 3 mg/L. The degree of removal ranged between 20 – 70% depending on the influent concentration. To date, the material has been in the columns for 15 months with no sign of disintegration or biofouling, which are important factors when considering future deployment. The performance will be improved by minimizing the grain size of the material in order to expose more surface area to the water and force the water into a convoluted path through the columns. This optimization phase of development will be completed before Christmas 2019, with a view to commercial deployment in 2020.

The Sludge Treatment Wetland produced good quality soil conditioner. It was valorized in order to find out if it will function with digestate from a biogas plant supplied with algae from the photobioreactors. The load was very low – only 8.8 kg digestate per m2/ y in the demonstration facility because there was no more digestate available. The entire distribution system worked well and the plants established well. The filter material was able to let the water pass. Calculated for a normal load of 60 kg of dry matter per m2 and the contents tested for the digestate, the performances of the facility would be the following:

Because there is domestic wastewater in the incoming effluent, there are pathogens in the final product. Therefore it has to be composted at a temperature of 70°C to kill the pathogens. The composting process uses the content of nitrogen in the sludge.

The contents of heavy metals are the following:

All other heavy metals are in very low concentrations.

According to the regulations for heavy metals in sludge and soil, in Spain and Denmark, the digestate is fulfilling regulations and can be used as a valuable soil conditioner. Therefore the technology and the sludge is ready for utilization within the regulations.

Finally, the construction costs and especially the operation costs are very low. 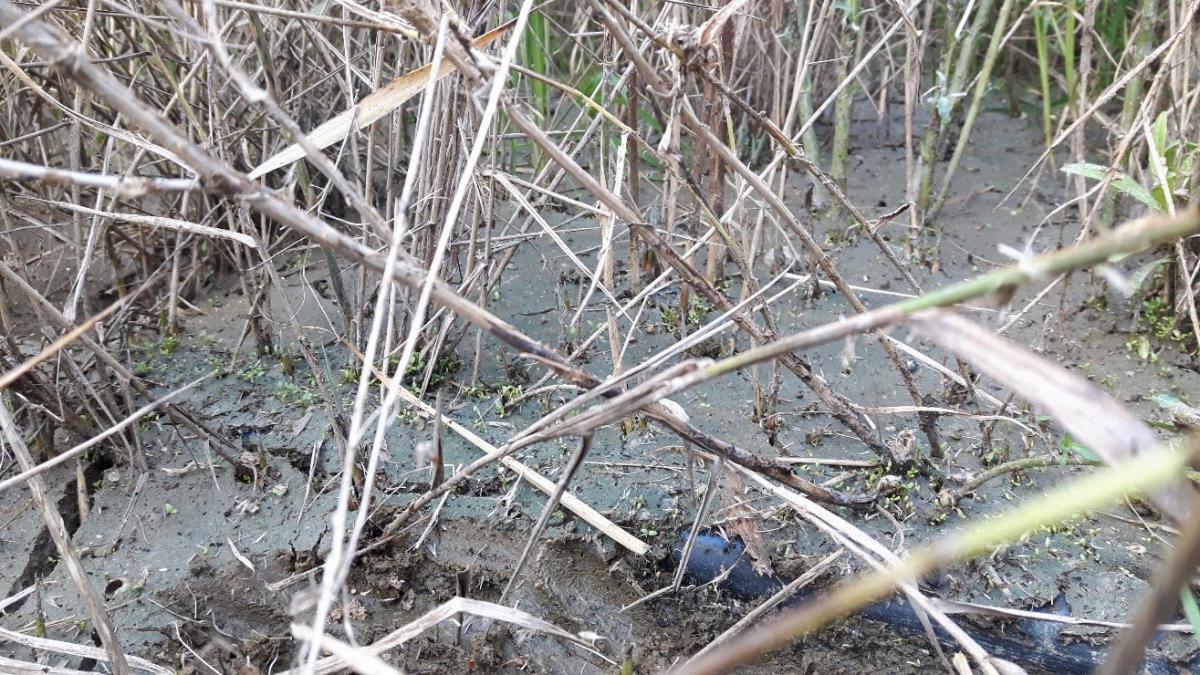 Digestate/sludge layer in Sludge Treatment Wetland is dewatered only by help of plants and evapotranspiration. © Center for Recirkulering