Phototrophic purple bacteria cultivated in raceways surge as a new and low energy system for PHA production achieving high productivities and PHA content up to 35%. 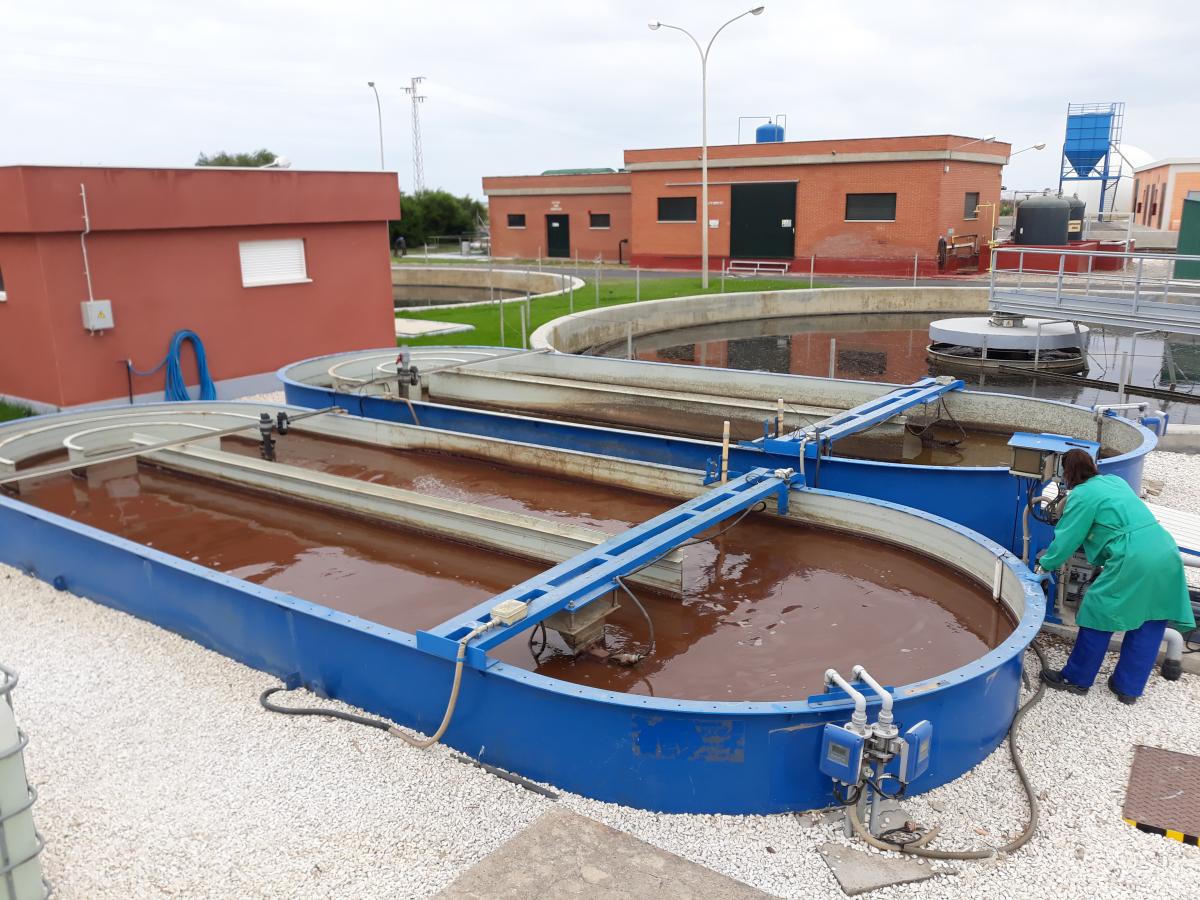 Cost effective photosynthetic biogas upgrading produced high quality biomethane (CH4 > 95%) while recovering nutrients from centrate through microalgae cultivation. Once the control strategy was developed and validated at pilot scale at UVA facilities, the next objective was to implement and validate the control system under outdoors and semi-scale conditions at Chiclana de la Frontera site. The programing of the control system in the SCADA was initially conducted in accordance to the results obtained at UVA facilities. The control strategy was capable to sustain a biomethane quality complying with European regulations, despite the variations in pH and biogas flow rate, using the Liquid to Biogas ratio (L/G) as a control variable.  The treatment capacity reached was 9.6 m3/d of biogas. The higher the pH, the lower the L/G ratios to reach the set point, the lower the oxygen concentrations and the higher the methane concentrations. The control system was capable of providing a biomethane with a composition complying with most international regulations (CH4 > 95 %, O2 < 1 %, and CO2 < 2 %), while saving energy during the upgrading process. The technology was also capable of operating with real centrate, which represents a key benefit in terms of environmental sustainability. 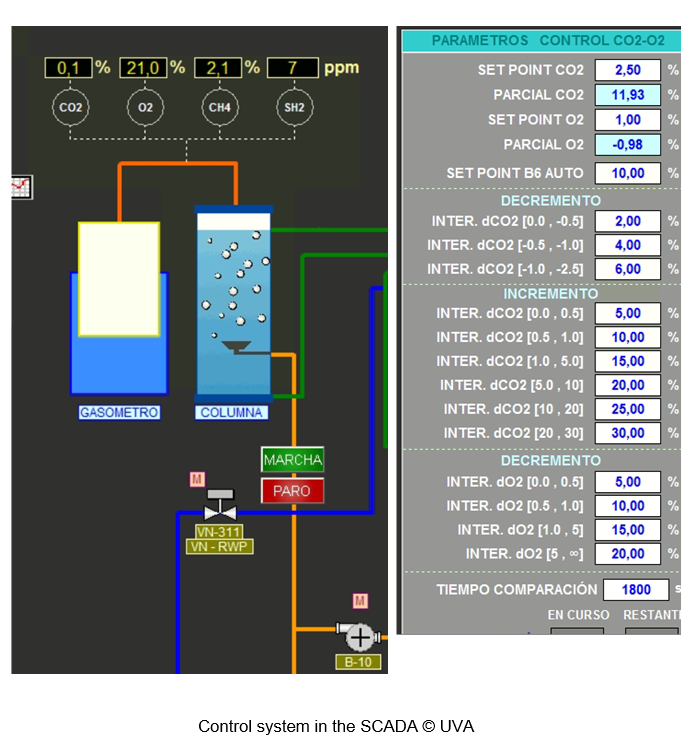 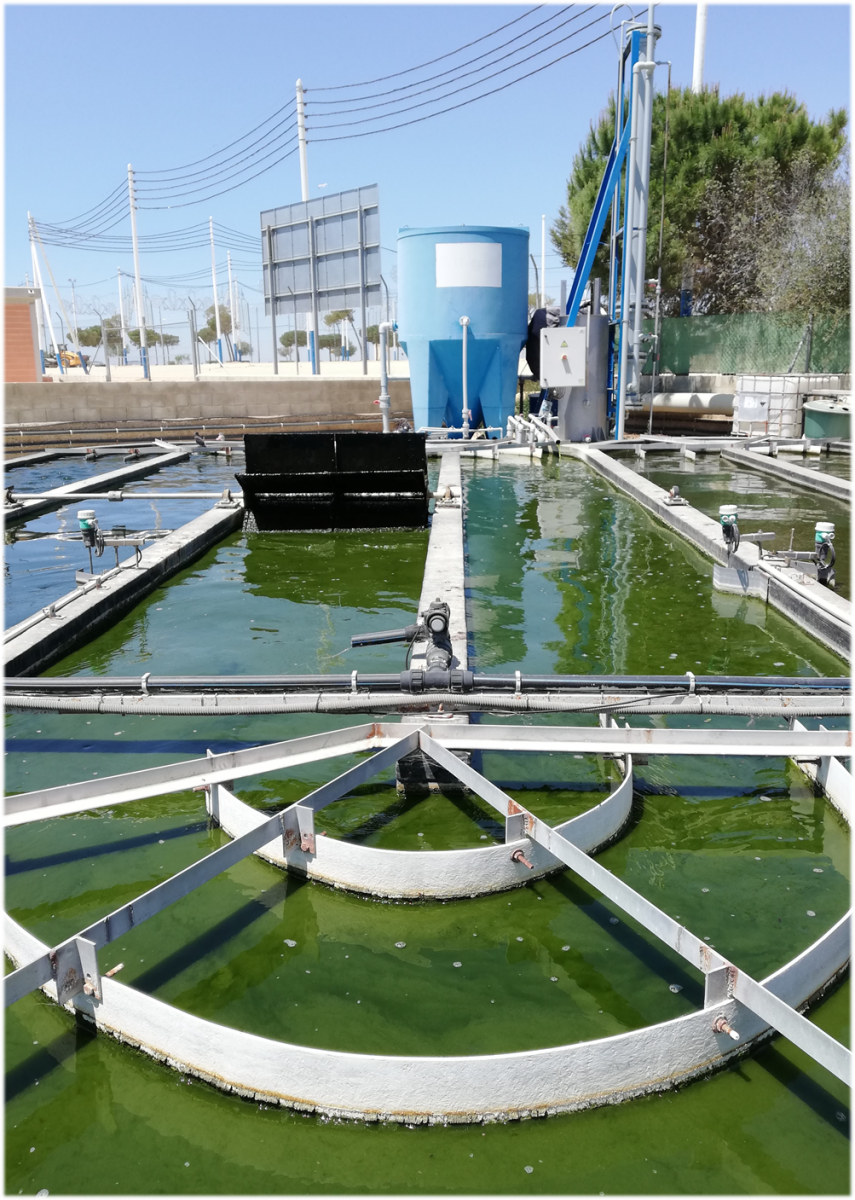 Evaporative system was validated as a nature-based system to treat digestate coming from the anaerobic codigestion, while producing biomass and a good structure soil conditioner. It was made as a lined basin on 250 m2 including perimeter bonds. The digestate was distributed in a ditch in the middle axis of the facility by a pipe system on a monopump.

Since it was the first system made in subtropical areas, several Salix clones were tested (S. alba and S. viminalis) as well as 2 Phylostachys varieties and Eucalyptus varieties. Only Eucalyptus camaldulensis was able to grow and to cope with the very rough climate at the south coast of Spain with the strong and dry wind, the Levante. These trees used the water and some nutrients from the digestate to grow. In this process the digestate/sludge is dewatered to less than 30 % dry matter, only by evapotranspiration from the eucalyptus. The sludge has a very good structure for soil conditioning of arable land. At the same time, the production of biomass in the eucalyptus trees is really high. The estimated performances of this facility for this demonstration process are:

The content of heavy metals are in general very low even if the digestate comes from municipal wastewater (there may be lead in the sludge).

The system need only few more changes before it is ready to be used in the market as a natural system with treating sludge, with low construction and operating costs. 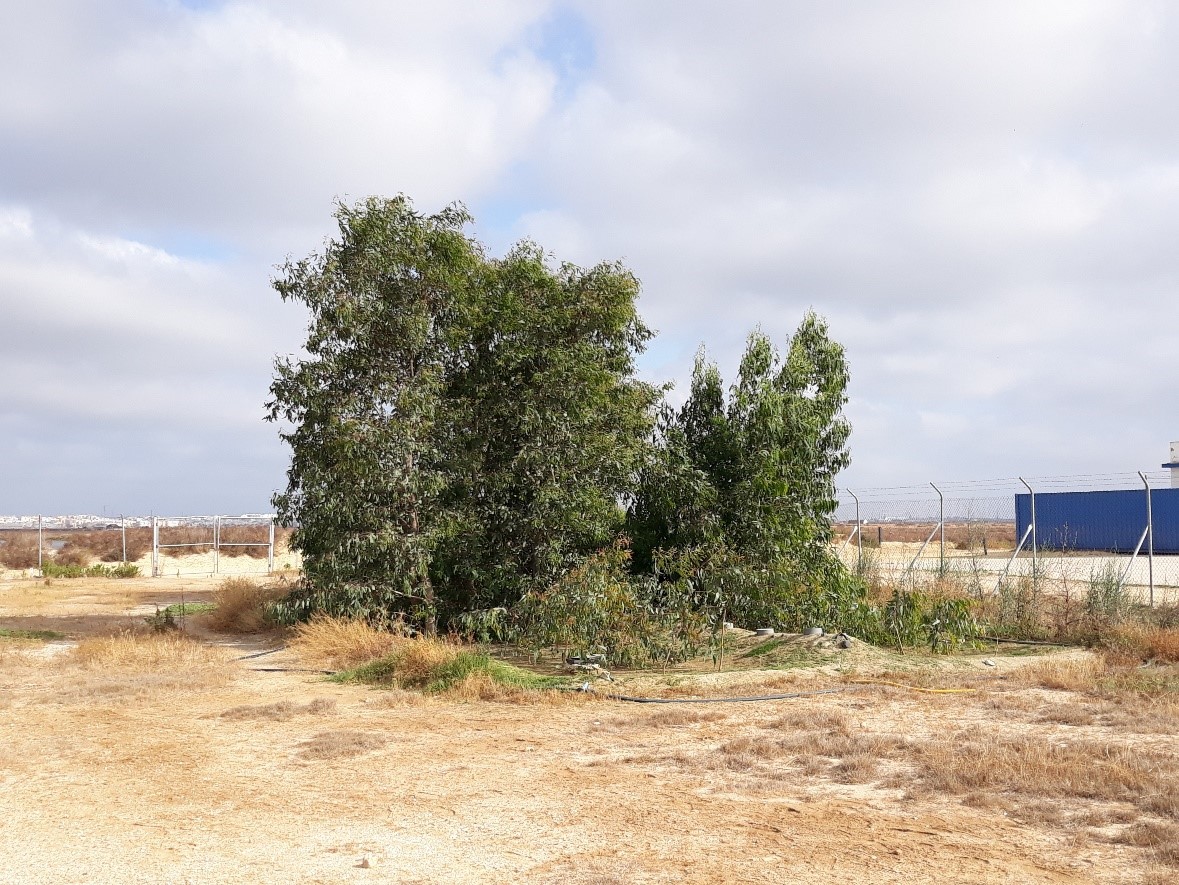 Newly planted Eucaluptus camaldulensis beside grown up and ready for harvest other eucalyptus in Chiclana. © AQUALIA 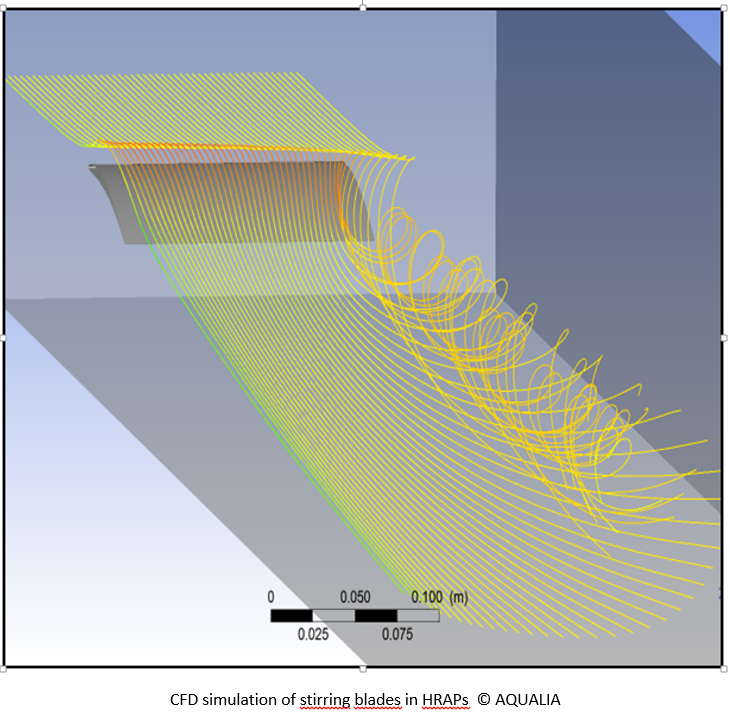 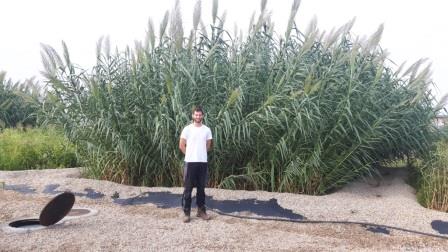 The demonstration was made of 2 facilities of 50 m2 each, with Phragmites australis (one was reference facility) and 2 facilities of 50 m2 each with Arundo donax (one was reference facility). The four facilities were all operated with 4 m3 of outlet water per day, coming from HRAP after passing a flotation process. The outlet water after flotation had a too high level of ammonium to make the disinfection process in the solar-anodic disinfection system of Autarcon. The fifth planted filter was also planted with Phragmites australis. It was operated directly with municipal wastewater (previously screened and settled in a simple settling tank). It was loaded with 2 m3/d with the selected filter material.

In both systems it was possible to bring down the organic load, suspended solids and ammonia level to a sufficient level to make the extraction of phosphorous and the disinfection process. 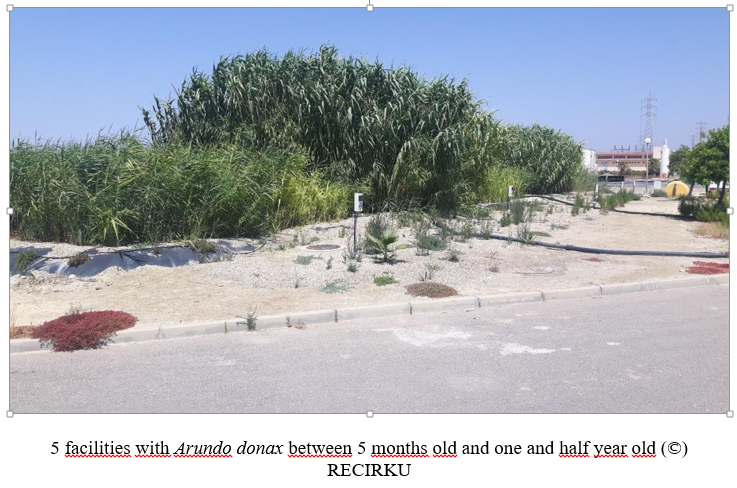 P adsorption with coated material developed was stable for at least 12 months in lab and field trials. The material was effective adsorbing P if the dose rate of P into the system was about 10 mg/l. Bioavailable P from nutrient saturated materials as soil amendment was tested. 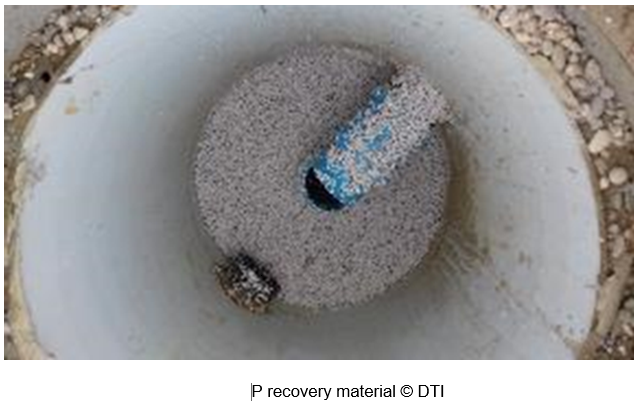 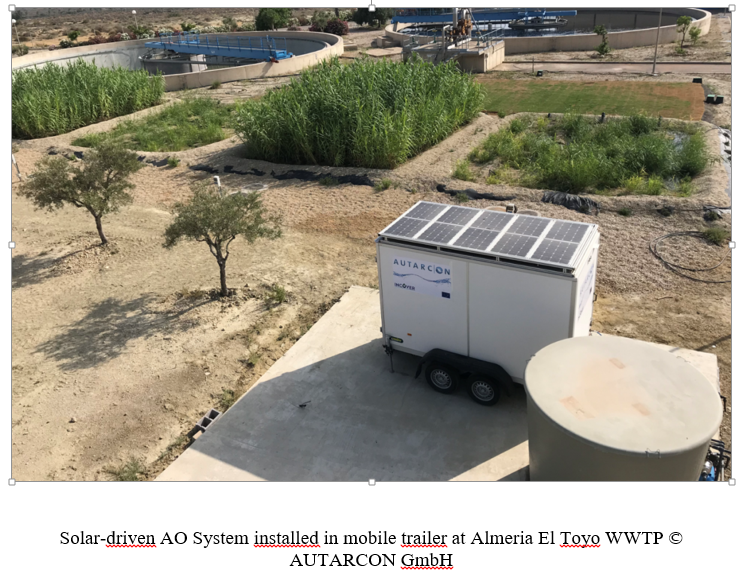 Smart irrigation system was tested in a 250 m2 grass field permitting to reduce energy and water consumption, thanks to FINT’s irrigation controller, a hardware unit that controls up to four irrigation zones. FINoT scheduler, a software module, programmes how often watering cycles occur and for how long for each zone. More information here. 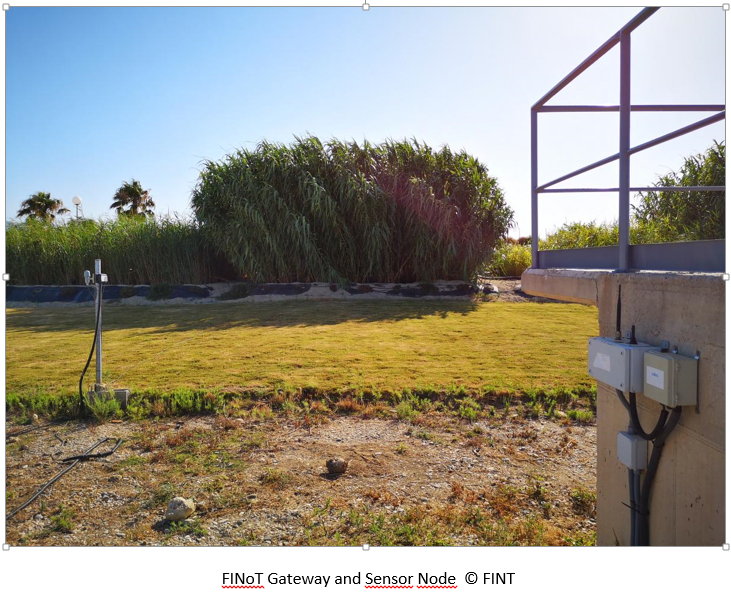